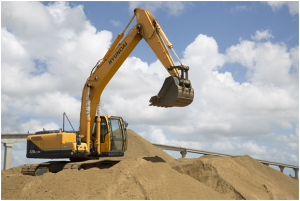 The excavator has three main parts: a house, an arm, and tracks. The latter contains a hydraulic motor that provides drive to individual tracks. The house has an operator’s cab, and counterweight, as well as fuel and hydraulic oil tanks. The swivel on the arm is the mechanism that enables it to turn 360 degrees and dig up to 32 feet deep. During operation, the hydraulics supply hydraulic fluid through a hose that connects to a quick coupler.

The hydraulic excavator uses two tracks, one of which is stopped while the other is moved. The movement of these tracks turns the entire unit. A good operator can turn the unit in tight spaces by engaging the reverse and forward controls on one track. The cab has a tachometer that monitors the speed of the arm and steers it through a field. If the operator does not want to operate the machine manually, he can program the machine to perform repetitive actions.

The excavator’s undercarriage is connected to its cab. This cab is positioned on a turntable region that rotates on tracks. The tracks follow the same principle as the chain drive. The tracks rotate within an assembly of idlers and sprockets. Idlers play a crucial alignment role. The hydraulics in an excavator make it easy for the machine to move and lift materials.

A hydraulic excavator is a rotating house that features a hydraulic motor and gears. It can swing around 360 degrees without hindrance. The engine drives hydraulic pumps that provide oil under high pressure to various attachments. The arm moves up and down and shifts to the left and right. Its bucket is attached to the arm. The arms and booms are connected at an articulated joint. The operator controls the action of the arms and the boom with a lever on the cab.

An excavator has a 3-part system: the arm and the undercarriage. The arm is the main part of an excavator, and the arms are controlled by three hydraulic cylinders. The first piston lifts the arm, while the second raises it. Once the arm has been fully extended, the next part of the chain is attached to the lower frame chassis. Ultimately, an excavator has three major parts: the boom and the undercarriage.